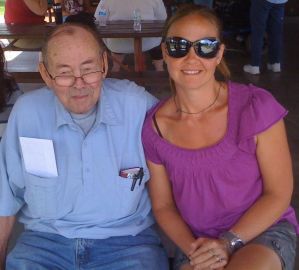 This is Dick.  He’s my friend and running mentor.  He turns 70 approximately 3 weeks afer my dad does.

I love my dad.  I think he’s the smartest, toughest guy I know.  Fifty percent of my genes came from him and they fit me pretty well.  I wouldn’t trade my dad for anyone.  But lets face it, when I turn 70 years old.  I want to be a Dick.

Dick’s a pretty amazing guy.  He’s a runner (obviously) and has been for over 50 years.  Dick will tell you that there are a lot of reasons to run, but there is only one correct reason: because you love it.

Dick runs 4-5 days a week and averages about 40-45 miles.  He cross trains, lifts weights and does yoga.  And like every runner I know, he smiles all the time.

I have no doubt that Dick is a little stiff in the morning and occasionally has a hard time getting up.  That just comes with age.  But overall, he’s in better shape then most people half his age.  I choose Dick.  I want to be a big Dick when I’m 70.

You may be thirty years old, or maybe in your late twenties.  Did you just hit fifty?  I really don’t care. What I want you to know is this:  Today is the day when you need to choose your 70.  Not tomorrow.

By the time you’re sitting at your kitchen table filling out the invitations to your seventieth birthday, it’s too late to pick your 70.  That decision needs to be made right now.

So what is it?  Do you choose Dick?

If you do, then I invite you to return to this blog over the next couple of weeks.  I plan to teach you how to be the best Dick you can be through a series of interviews with none other than Dick himself.  If you are already a Dick, just a little one or a young one, that’s okay too.  Come back because you need to know how to remain a Dick for the rest of your life.  What better way to do that then to learn from a succesful Dick of almost 70 years?

That’s right, you will hear how it all began over 50 years ago, what keeps Dick going, what his training schedule is, and even hear a few stories about crazy things that have happened to him while running.  The best way to be a Dick, is to learn from one.

See you next week, Dick.

You may think that as a self-proclaimed running guru, running is my gift.  Or maybe, as a tri-athlete, I’m a gifted swimmer or cyclist.  In reality, I am above average at all those sports, but not really, really good at any of them.  Any above-averageness that I have for sports is purely because I train hard and has nothing to do with being gifted.

I’m good at a lot of things, I admit it.  But I don’t think you can call me gifted at anything.  Well, except one little thing.  I can pour a beer.

Brief background: If you read the post about Martha VS. The Dog, you probably know I am the founder of a run club.  We were called The Georgetown Run Club but over the last five years we have evolved into The Georgetown Run/Walk Club and Intellectual Society.  🙂

As a run club, running is an option.  But showing up for dinner and beer is a requirement.  See, I love beer, and so does my run club.  I like beer SO much that I want to have more than one man-gantic beer with dinner, but I don’t want two (that would just be excessive).  That’s when my buddy Hal comes in, he has the same desire for beer.  So we split our second beer every week, taking turns paying for it.  It’s my job to do the pouring.

As the above picture shows, I can pour a beer within a millimeter of being perfectly in half (and leave people in such awe that their mouth hangs open).  And there is no pouring back and forth, no add a little then a little more.  It is a straight up pour and set ’em down.  And this is what happens…every week.

Stay tuned for my next blog post when I talk about why I love Dick.

Trail of Tears and The Tough Mudder.

I did another #Tough #Mudder this past Saturday.  My first one was in Indiana on June 16th.  It was about 90 degrees that day.  I had a team of six, me being the only girl.  The guys were all late twenties except me and another guy who are 36 and 37 respectively. As a whole we looked pretty fit and bad ass.  Our pre-run picture was worthy, it looked like a team who would finish with a smile.

My only goal for the that Mudder was to NOT be the weakest link.  As long as I wasn’t holding the five other guys back, I didn’t care.  And since the guys managed to drag my ass over all the walls,

I wasn’t holding them behind because endurance-wise I was easily prepared.  As far as strength went, well put it this way… I did Yoga for my training.

But let’s face it, except for the gynormic walls, the monkey bars and the swinging ropes, the Tough Mudder is more about pain tolerance and nerve.  Dunking your body into an ice bath doesn’t take strength, it takes a serious set of balls.

My team last Saturday looked a little different.  There was only four of us and it was bitterly cold.

My Husband: extremely fit, weight lifter, been biking for 5 months, runs 2-3 times a week but can’t go more than 5 miles without foot pain or shin pain.  He had me concerned.

Me: #Run, #Bike, or #swim every day.  Endurance is high, muscle strength (useful muscles anyway) is low.  Extremely determined but feeling exceptionally fat and bloated at the moment.

Kris: Fit male of #Asian decent and undetermined age. He has been running with my run club for a few months and seems to be right on track as far as training goes.  He does pull-ups at the park and is up to running eight miles no problem.

Hal:  Hal is fifty-something.  He is a good friend and been in my run club since it’s infancy; over five years.  He has been known to run a marathon on four weeks training and yells out things like, “Pink Clitorous” without provocation when referring to a Ford Taurus.  He hasn’t been running much lately and he hurt his back so bad 2 weeks ago that he needed assistance rising from his chair.

We looked like a gang that rides the short bus.

The beauty of dunking your already-shivering body under ice water is that the outside air actually feels warm when your body shoots back out gasping for air.  When you start running again you feel suddenly alive…until you start getting cold again.

90% of nerve at the Tough Mudder is made possible through the herd mentality.  When everyone around you is roaring like beasts, then diving under barbed wire into water surrounded by dangling electrical wires, it just seems like the right thing to do.

The first of us to show signs of pain was Kris. His hamstrings started cramping around mile six, making it nearly impossible for him to walk with straight legs.  He wasn’t alone, at the top of every hill there were no fewer than 12 husky men laying on the ground rolling while grasping their legs (and whining like a bunch of sissys).

As we trudged on, he no longer looked Asian.  With a metallic Mylar blanked wrapped over his head, his slumped over carriage, and a smear of grey mud on his lips and most of his face, he looked more like an old indian man walking the Trail of Tears.

Danny, my husband, surprised me.  I assumed he would be the first to complain of pain.  But instead he ran ahead in full force, yelling and cheering others on.  He was the leader of our gang up until mile eight, when he suddenly seized up and began walking like a penguin.

Hal wavered.  At first he had a hard time keeping up with us.  He spent excessive time fumbling with his knee pads and rubber gloves.  But he kept plugging away like a champ and in the end put us all to shame.

I was feeling fine endurance-wise.  My body didn’t like the cold and it was shaken with bouts of shivering as the miles passed.  Each water obstacle became harder and harder to do.  I don’t think you could call me a complete sissy until about mile nine, when I did a face plant in the mud and nearly broke my nose.  Grace has never been used to describe me but at the Mudder it wass even worse.   For the last 3 miles I was conservative (read wimpy).

We approached Mount Everest, the mountain sized half-pipe that requires (for mere mortals anyway) someone on top to catch your flailing body to get you over it.  My hyperthermic body ached as I stood in line, watching as people made half-assed efforts, slamming their bodies against the wood and ending up like Mr. Bill.

Hal made one good run for it before deciding without question he would not make a second.  Kris, nearly dead at this point, made a single heroic dash at it and made it with the help of some bystanders.  He put us all to shame with his bravery.  Strong warrior.

We walked up to the finish line, which is on the other side of thousands of dangling live electrical wires and a pool of water/mud.  We would have to run as fast as possible while getting shocked, scale a mud ditch and make our escape.  Everyone did it with class, except me.

I ran hard, imagining the beer waiting for me on the other side.  I took my shock with pride, scaled the mud bank then slipped backwards, slamming my body down with a thud and a bounce as the announcer said, “oh, that hurt.”

(this photo is not of me btw, but it shows the situation so well I had to use it.)

And now, three days later, the pain is nearly gone.  And yes, we are looking for the next Mudder we plan to attend.  This time however, it will be during the summer.  I’m not ready to get the tattoo yet, but I will say I have plenty of scars to prove my dedication.  That gives me an idea for my next blog post.  Do you care to see my scars?  I bet mines bigger than yours is:)

See the giveaway details at Goodreads.

Out and Back (a novel)

Out and Back (a novel)